I get a bit irked whenever leadership consultants use the terminology, ‘superpower’, as in “What’s your superpower?” because it builds up the question too much, especially knowing that the answer will likely be a let-down, like, “I’m a great organizer” or “I’m very analytical”.  That’s not really a ‘superpower’ based on my understanding of what makes Wonder Woman, the Incredible Hulk, or Spider Man so amazing. What happened to telekinesis, or flying, or camouflaging?

Well, terminology aside, ‘superpowers’ typically refer to relative strengths — that is, compared to other traits a particular individual has, what do they do best?  That’s what books/tools like Gallup’s Strengthsfinder purport to suss out, through a 177-question survey where one is presented with two conditions at a time and asked to select which resonates best.  At the end, the tool generates the top 5 ‘strengths’ from a list of 34 traits.

The underlying philosophy of Strengthsfinder is that, by understanding your natural talents, you can better seek out opportunities and jobs that play to those innate strengths.

This is a good thing.  But it took me a little while to understand this concept, because I grew up in a world where a strength was relative to other people’s abilities, not just one’s own.  And it wasn’t based on individual preferences; it was something exhibited for others to compare and assess.  For example, I knew that I was particularly good at math because, in middle school, I was admitted to the Unified Math class that included only eight other nerds.  To me, strengths were scarce and special, something objectively or comparatively measurable, and not something everyone had, nor something that was derived through personal preferences.  This new ‘definition’ of strengths felt overly solipsistic, and was like giving out participation trophies to make everyone feel included.  I wondered how this would translate in a work setting, where holding a fair and consistent bar for performance is expected and fair.

“[The classic theory of comparative advantage explains…] why countries engage in international trade even when one country’s workers are more efficient at producing every single good than workers in other countries. …If two countries capable of producing two commodities engage in the free market, then each country will increase its overall consumption by exporting the good for which it has a comparative advantage while importing the other good, provided that there exist differences in labor productivity between both countries.

Widely regarded as one of the most powerful yet counter-intuitive insights in economics, [this] theory implies that comparative advantage rather than absolute advantage is responsible for much of international trade.”

If you replace the notion of ‘products’ with ‘strengths’, this helps explain why — even when someone is objectively more talented across-the-board — every person contributes what they themselves are best able to contribute.

The limiting factor that affects all of us is time, and so even the most omni-talented person can’t do everything; they have to pick their key and most desired traits to bring to an organization, a job, or a relationship.  And the other person who may not have the same level of intrinsic talents provides value by contributing their best traits.  It leads to an overall improved collective state of affairs.  The diagrams I found online below demonstrate this from an economic point of view, if you want to understand this better: 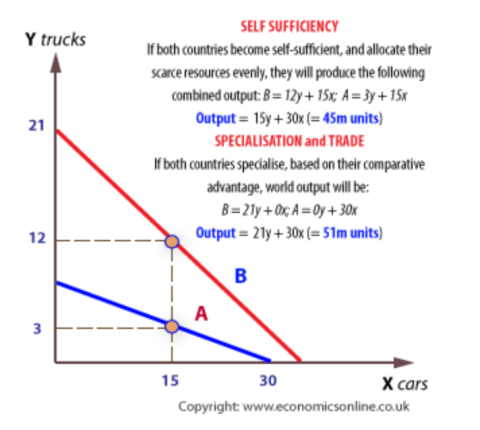 A question you might be wondering is, “What good is it to be omni-talented, then, if you can only choose a few strengths to focus on?”  Well, I guess someone like this has the option to choose which strengths to develop further, weighing the supply/demand of each strength to select the most coveted (highly compensated) ones, or could determine which they enjoy doing most.  Whereas someone who is perhaps less objectively talented will have fewer such options.

Ultimately, absolute strengths may exist, but they may not matter unless they are fostered, developed, and used.  It’s a weird idea, and counterintuitive, but it seems about right.

Also — to answer my own question about how to assess employees’ abilities fairly — if you have a clear, well-communicated set of expectations for performance, then I think it’s still possible to accept the definition of strengths above while maintaining a consistent bar.  Performance is rarely a judgment about someone’s specific strengths, but rather, how those strengths and traits manifest at work.

What do others think?  Does this make sense?